February is LGBT+ History Month in the UK. 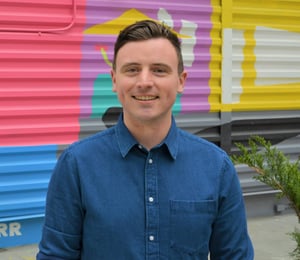 It’s an observance of the LGBTI+ community, a reflection on the movement towards equal rights and treatment, and more generally, a celebration of the contributions of LGBTI+ people across the globe. This year one of the themes across the UK is ‘What we have learned’. It hits home for Pat Caldwell, Head of People at FundApps, as he reflects on almost a decade in HR roles where he spent 70% of his career actively hiding his sexuality at work.

If you’re not familiar with LGBT+ History Month, it takes place in February in the UK in the wake of Section 28 of the Local Government Act 1988 (snippet below). It was repealed in Scotland in 2000 and the rest of the UK in 2003.

As I read through Section 28, it’s humbling to know legislation like that has only been repealed so recently in our history. It’s easy to point at legislation and argue that it no longer exists anymore and everything is great, but as any LGBTI+ person who has lived through the stereotypes and discrimination will tell you, the practice and perspectives of people always outlive the legislation.

I went to school and university in the 90s and 00s in Sydney and Brisbane in Australia. I knew I was gay pretty early, but convinced myself that something was wrong with me and I’d outgrow it. Until I didn’t. But I kept covering my sexuality because it was easier that way. I didn’t have the confidence, stamina or skills to overcome the labels of poof, queer, faggot, sissy and homo that I observed so freely used to describe boys who didn’t seem to meet the norms of masculinity or those who just appeared weak or vulnerable. Perhaps my favorite expression is how often people call something they don’t like ‘gay’. I can’t remember the last time someone described their cheerful demeanour or sense of joy as gay - the literal definition of the word.

I sometimes wish I could relive some of those years with everything I’ve learned to date and be more of a positive influence on the identities and wellbeing of those around me. The importance of LGBTI+ inclusive education is supported by key findings from Stonewall’s LGBT in Britain - Health Report. It’s not an easy read. It’s time for all of us to step up. Building inclusion means holding up the mirror and challenging our own perspectives and accepting others for who they are. There’s no difference in education or in the workplace.

I joined FundApps in late-2017 and it’s the first time I’ve ever been openly gay at work. By this stage in my life, my family knew about my sexuality but I was very skilled in putting up walls around my identity at work to protect myself. For most of my career I’ve actively covered my sexuality out of fear of repercussion, harassment and discrimination. It’s very difficult to articulate how hiding my sexuality made me feel. In some ways, it felt disrespectful to those around me whose friendship and working relationships I cherished (and still do), but in other ways it made me feel safe.

I recall many moments in my career where I’ve felt validated to be a ‘covered’ employee. Team managers convinced me there were “no poofs on his team because they’d probably hit on the other boys”; being asked in front of my new team if I had a girlfriend or ‘missus; listening to a fascinating conversation about how gay dads don’t deserve maternity/primary carer leave because they aren’t giving birth (and that the child will probably ‘want’ to be gay); a colleague telling me my body language makes me look like I bat for the other team and it amused them. Interestingly, I remember going home that night and practicing how I talk and present myself in front of the mirror to see if I could make myself appear more straight. It feels odd reflecting on this but I needed to feel safe and, frankly, appearing heterosexual in the workplace is safe. Add that to the fact I’m white and male and it’s basically an open runway for my career.

My decision to be out at FundApps wasn’t a deliberate decision. It just… happened. There weren’t any other LGBTI+ employees that I knew about. No rainbow flags and logos on the walls. No LGBTI+ networking group. No Pride float. Yet from day one I felt psychologically safe to be out at work. Describing the feeling of being out was a bit weird. I felt neither relief nor the anxiety that I expected.

I think what made the most difference was the feeling of being valued for who I am. When my colleagues found out I was gay, I wasn’t told “it doesn’t matter” or “I don’t care about that” as though it was an insignificant part of who I am, because it’s not - it’s arguably the most influential and concrete part of my identity, and it drives most of my actions in the diversity & inclusion space. At the same time, I wasn’t met with surprise, or any stand-off reactions, or any stories about how they have a friend who’s gay and therefore they can relate. Our Engineering Manager warmly thanked me for sharing that part of myself with him and that he really appreciates it. My manager (the CEO/Founder) created a safe space where I can talk openly about my LGBTI+ identity and experiences, tests his own assumptions/perspectives and pushes all of us (including me) to keep moving the inclusion needle forward across FundApps.

Fast forward two years and that same feeling hasn’t changed. We have people from all different nationalities, religions, life experiences and gender- and sexuality-diverse backgrounds. For the first time in my career, I genuinely feel the sense of belonging that leadership books have been describing to me academically for the last decade. And it’s that sense of belonging and psychological safety that impresses me the most about the culture that all FundAppers have built over the past 9.5 years, even as we’ve outgrown the startup label. There’s no pressure to come out, but for those who want to, we feel valued doing so.

Our approach to building an inclusive workplace beyond just LGBTI+ has focused on exactly that - inclusion. Belonging. Psychological safety. Whilst we’re headquartered in the UK, we also have growing offices in Singapore (where despite a growing shift in attitude to gender and sexuality, Section 377A still exists) and the USA (where things… well... aren’t great. Type ‘LGBT rights in the USA’ into Google News).

We’ve never set diversity targets, never created and published a D&I Action Plan, never done much by way of sponsorship/floats/events around it. Sure, there’s a time and place for all of that. But for us as a company, the most impactful thing we can do for our LGBTI+ FundAppers was to keep nurturing that safe space, the open dialogue and that sense of being valued for the unique identity each FundApper brings to our dino-party (our mascot is Trevor the dinosaur… very ironic, I know).

So that’s what we’re doing. In 2018 we made a very symbolic statement to FundAppers by scrapping our maternity/paternity leave and replacing it with a parental leave package that was completely blind to gender, family structure and tenure. In 2019, we then increased our parental leave from 12 weeks to 26 weeks at full pay. We are a team of very gender- and sexuality-diverse FundAppers and parental leave legislation in most countries, including the UK, needs urgent modernisation out of the jurassic age to reflect the diversity of the UK community.

We’ve had to have some courageous conversations with people not displaying inclusive behaviors. It’s rarely deliberate and everyone is vulnerable to behaviours that aren’t inclusive. It’s part of being human, but that doesn’t make it less harmful. I’ve even had a colleague coach me on my own behaviour which I reflect on regularly. Nurturing this safe space is not HR’s responsibility - it’s everyone’s responsibility. And part of that means having some candid conversations with those around us to keep us in check.

We’ve also found a great habit of running a fireside chat called Gender, Sex & Sexuality to bring taboo topics around the LGBTI+ community into the open air for discussion in a safe space. This isn’t an ordinary diversity training session - we deliberately open some canned worms to get things out in the open. We talk about the stereotypes of women and men in being parents, how fluid the concepts of gender and sexuality can be as well as our often narrow perceptions of masculinity and femininity. We also put offensive words on the screen in big, bold letters so we can talk about why they are offensive and what they actually mean. Sure, it’s confronting and a little bit uncomfortable. It certainly doesn’t comply with Section 28. But the rich discussion comes from holding up the mirror to ourselves, and others, and exploring our perceptions, biases and beliefs.

Last week, a couple of FundAppers and I went to a talk with Richie Jackson about his new book Gay Like Me. He talked about allyship but went one step further (which I’m sure he won’t mind me sharing) and suggested advocacy. This LGBT+ History Month, please don’t just settle for a LinkedIn post, a rainbow logo and a poster in the office and then do nothing until Pride. Talk to your team, your family, your colleagues. Be curious about things you don’t understand (YouTube has some great educational content!). Push for change in the workplace if you see things like archaic parental leave provisions or poor leadership behaviours. Go and volunteer at an LGBTI+ youth shelter or health clinic. Let’s turn this year’s theme of ‘What we have learned’ to also capture ‘What we are learning’.