Do You Know Your Total Cost of Ownership? (Part 1)


Total Cost of Ownership, often just abbreviated to TCO, is a high falutin' term for "How much do we spend to do x".

It's either measured yearly or over a time period (generally 5 - 10 years) and then annualised.

In our experience it is something that financial institutions are shockingly bad at calculating / estimating, and the larger the institution the more difficult it becomes. Calculating your existing spend can be tricky, but calculating your potential future spend when deciding on a vendor or to build can prove to be a minefield of hidden costs.

In this series of three posts we’ll look at some methods of getting an accurate estimate for your potential spend on doing Shareholding Disclosure / Foreign Ownership / Sensitive Industries monitoring, when building, when purchasing an On-Premise solution or when subscribing to a service.

Part 1: Building your own solution

We strongly believe that hosting companies should host, software companies should build software and asset managers should manage assets. We believe the cloud is perfect for compliance and we’ve previously warned against the hazards of building rule engines as well as the risks of coding your own rules. But we’re obviously a little bit biased!

To start off with we do not consider using Excel a viable solution. It is incredibly error prone, impossible to automate and just not fit for purpose as a compliance monitoring solution. Increasingly, regulators are taking action against companies which are using makeshift solutions and are not handling their handling regulatory duties with due care and attention.

But say you do go down the route to build your own software - predicting the duration and likely cost of a project in advance is extremely difficult. It is a well known fact that people tend to underestimate (the so called “Planning Fallacy”), sometimes wildly. Software projects in particular are renowned for overrunning - search for “Software estimates gone wrong” and you’ll find a plethora of articles such as “The dark art of software estimation”, “Why software projects take longer than you think: a statistical model” and books such as “Software Estimation: Demystifying the Black Art”.

For a small hedge fund, if all stars align, it might take a handful of people less than a year to build a compliance engine and code the rules, for a large investment bank it might take 20 - 30 people over 2 years.

So in total it’s a ballpark £340k - £3 million to design, create and test the software & rules, and hoping that everything goes to plan. At the European Compliance Conference in Barcelona in 2014 one very large Investment Bank shared openly that they had spent ca. 7-8 Million Euro to develop their internal system.

Building the system is the first part, but as opposed to a table or a chair or even a piece of software that can be considered “finished”, regulatory compliance is an ever moving goalpost. Unlike many regulations where you are only subject to the regulation of your host/domicile country, Shareholding Disclosure is mostly subject to the competent authority of the country where the company you are investing in is listed (and sometimes the country where the company is incorporated). This means in practise that you are subject to ca. 100 national regulators. In Sensitive Industries this gets multiplied further - 100 countries x ca. 10 - 20 “regulators” of the relevant industry.

The net effect of this is that regulations constantly change. In 2019 FundApps received ca. 200 regulatory updates from our Legal Information Provider aosphere - ca. 1 every working day.

So the running costs of an in-house system should be key factor in your decision:

Again this can vary wildly, depending if the organisation is small and only in 1 location or if very large and distributed globally. At the conference in Barcelona mentioned above, the Investment Bank said their yearly operating costs were 2 Million Euro, of which 1 Million was purely IT Costs.

Another item to take into account is technical obsolescence. We live in an age where technology is changing at an unprecedented rate. Technology which was cutting edge 10 years ago is no longer used. Therefore, building in-house carries the real risk that you choose a database / operating system / programming language which becomes obsolete. Once the original team that builds the system eventually moves on, can you find engineers to maintain and enhance the code? What happens if a new regulation comes out which requires extensive modification to the system? The current issue of banks having to drag 70 year old COBOL coders out of retirement at exorbitant day rates can become a reality very easily.

Finally, opportunity costs must be taken into account. What else could these people be working on rather than building a compliance engine? Compliance is a cost centre rather than a profit centre, so if the people were redeployed to work on revenue generating projects it would seem like a much more sensible use of valuable time and effort.

Hopefully this is some food for thought about potential hidden costs and risks when building your own solution. Please feel free to reach out to sales@fundapps.co if you’d like a copy of our TCO Calculator. And don't hesitate to get in touch if you'd like more information on how you can save yourselves time and money with our automated services.

In part 2 of this series we’ll look at the potential TCO for purchasing an off-the-shelf system that will be installed on your own servers (so called “On Premises” or “On-Prem”). 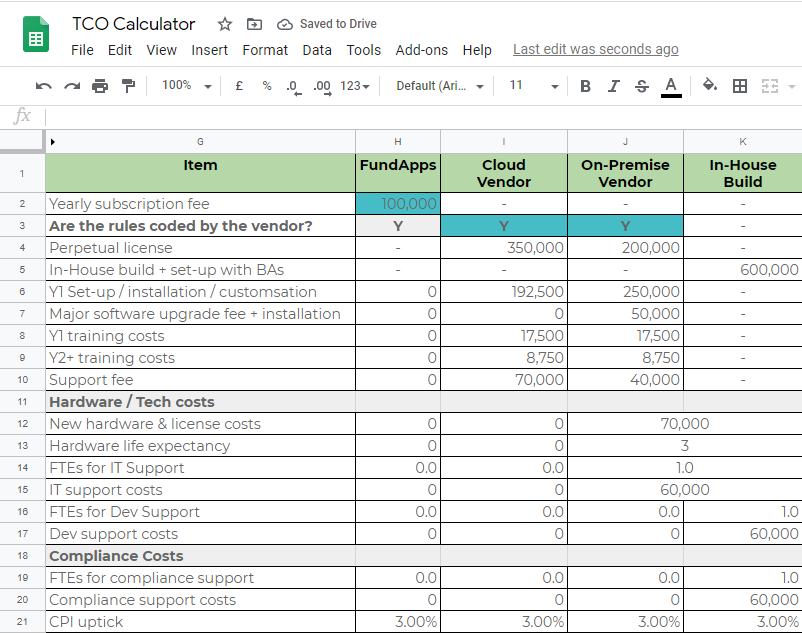 3 For reference, FundApps has a team of 7 full-time Compliance & Regulation experts